We have moved videos to the new SensusFidelium.tv website.
Click here to access the full-page version of the video.
Suzanne Pearson is our guest speaker for our October 27th meeting at 6 PM Central Time. She is a renowned speaker on many topics in the Catholic Church, having spoken at conferences for a decade or more including the Fatima Center, EWTN, and the Blessed Karl Symposium.

👤Thanks to Suzanne Pearson for her wonderful presentation.

🕓Timestamps!
00:00:30 - Suzanne, and the early days of the Fatima message. About the energy and interest in Fatima, and the collapse following the "anonymous" announcement from the Vatican in 1960 about the refusal to reveal the "Fatima Secret."
00:02:30 - Transition to the March 25, 2022 Consecration. Starts with a description of the turnout and how the event felt at the Arlington Cathedral.
00:04:43 - First question: The Consecration of both Ukraine and Russia.
00:05:24 - Discusses Pius XII Consecrations in 1942 and 1952 about consecrating the world vs. consecrating Russia.
00:07:50 - How the Vatican is hindering the fulfillment of the Fatima message & mission by diminishing the grace from the laity.
00:12:10 - The miracle following the Consecration should happen quickly, as the intention for the miracle is to spread devotion to the Immaculate Heart of Mary, and if it is late, people won't make the connection.
00:13:16 - Since the Vatican is doing deviant actions such as suppressing the Traditional Latin Mass and giving moral support and encouragement to pro abortionists and other sinful behaviors, there's not much indication the consecration was valid.
00:13:56 - Pope Francis did not compel the bishops of the world to do the Consecration, he invited them. Also, there was no official record, so we have no idea exactly how many took it seriously.
00:14:57 - Even if it was done correctly, there's no reason not to do it again, similar to how many times the whole world has been consecrated.
00:15:26 - Transition to the topic of the Third Secret.
00:16:45 - About the "reveal" of the Third Secret in 2000.
00:18:14 - Difference between what the Vatican released and what Suzanne expected.
00:19:23 - Suzanne's explanation for the difference, and what the Vatican came up with.
00:23:00 - Sister Lucy writing down the Third Secret.
00:26:18 - What happened to the Secret & all of the other documents Sister Lucy sent to Rome.
00:27:00 - How we know how long the Secret was (26 lines).
00:27:22 - Fast-forward to the Vatican reveal in 2000 - differences in paper, length, and content.
00:29:00 - Transition to Lateran Treaty connection to Fatima.
00:35:00 - Reasons why our Lady had chosen June 13, 1929 for the message regarding the Consecration.
00:39:22 - Transition to Blessed Karl's connection to Fatima.
00:45:00 - Pope Benedict XV's plea to Our Lady for peace in World War I.
00:48:37 - Blessed Karl and Vladimir Lenin.
00:50:24 - Comment by Bishop Rudolf Graber of Regensburg
00:58:12 - "The Best Kept Secret of Fatima" by José María Zavala and the interview with Exorcist Fr. Gabriele Amorth
01:02:00 - How to deal with all of these terrible things in our present time: Instructions from Our Lady.
01:04:30 - Transition to discussion between Suzanne and George concerning the 1960 anonymous announcement from the Vatican, and then about Sister Lucy being "silenced" following the interview with her by Father Augustine Fuentes.
01:06:57 - About the theory of Sister Lucy being replaced by a "body double" following that interview.
01:08:38 - About the "Consecrations" by Pope John Paul II in 1982 & 1984 (and how, in the latter Consecration, he meant to say Russia, but did not).
01:10:25 - On the 1989 anonymous message from the Vatican saying that the 1984 Consecration must be recognized as accepted.
01:13:30 - Discussion regarding the infiltration in the Vatican.
01:16:00 - Prophecy by Venerable Bartholomew Holzhauser several hundred years ago predicting this.
01:17:22 - John Vennari's book Alta Vendita and the plan for infiltration.
01:20:10 - Putin's speech regarding the West being no longer relevant.
01:22:00 - Discussion regarding the current situation in the Papacy.
01:23:15 - Question from audience member #1 regarding America Needs Fatima and their belief that the Consecration has already been completed.
01:25:20 - Suzanne reads a letter from the Fatima Center in 2017 regarding Archbishop Tadeusz Kondrusiewicz, then-Archibishop of Minsk, Belarus regarding his take on the Consecration and whether or not he participate if asked to again.
01:28:12 - The Archibishop's recount of his interview with "Sister Lucy."
01:30:00 - Suzanne talks about Roberto de Mattei, President of the Lepanto Foundation, and his rebuttal to the reports of Sister Lucy saying she had given her "approval" regarding the status of the Consecration as of 2017.
01:32:10 - Further discussion regarding Sister Lucy and the body double.
01:35:21 - Suzanne covers the story regarding Dr. Ingo Dollinger and then-Cardinal Ratzinger.
01:37:25 - George mentions Michael Davies, and talks about how we've responded to Our Lady's message.
01:39:15 - Fr. Malachi Martin's comments regarding Fatima are brought up.
01:40:00 - Audience member #1 brings up the question regarding the church going underground.
01:40:21 - George transitions to the discussion regarding Fatima being private revelation vs. public revelation.
01:41:34 - George asks Suzanne why more Catholic pundits haven't talked about the lack of fruits from the March 25th Consecration this year. Later transitions to back-and-forth regarding why nobody has done the Consecration the right way, and how there's very poor dissemination of information regarding Fatima.
01:45:00 - Suzanne talks about Fr. Dhanis who fought against the Fatima message.
01:46:00 - Transitions to talking about Pope Benedict XVI and his 360-degree turn on Fatima.
01:47:00 - Suzanne talks about ways to increase grace for the proper Consecration, such as two kinds of sacrifices: Offering up, and accepting what came.
01:49:00 - Audience member #1 talks about issues in the proliferation of heresy and desensitization to sin.
01:52:27 - Audience member #2 asks Suzanne for her thoughts regarding Putin and his role in the chastisement. Suzanne also mentions her thoughts for why Our Lady specifically chose Russia. Audience member #2 then brings up Russia's role saving Christianity in Syria.
01:57:25 - Question regarding where to find Suzanne's writings.
01:58:00 - Closing statement by George. 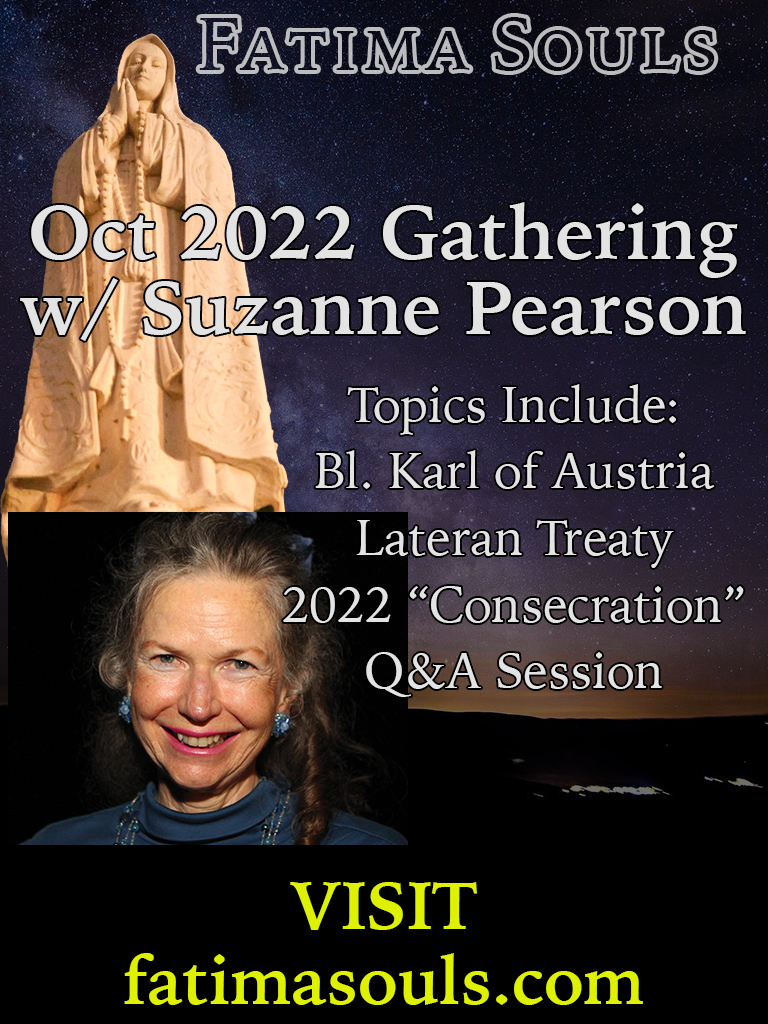